Annexation of 327-Acre Farm for Industrial Use 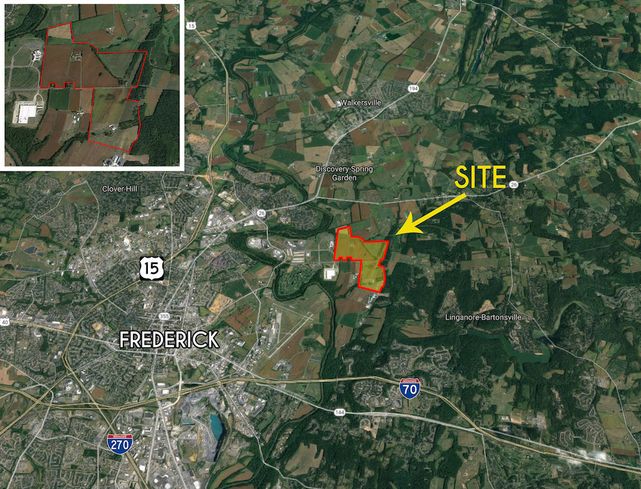 Photo Caption: Citing the need for more industrial zoned land, The City of Frederick, MD, annexed the Renn Farm, which is considered to be sizeable enough to quarter several large businesses.

The City of Frederick, MD recently annexed 327 acres of agricultural county land that, when rezoned, will be among the largest contiguous industrial properties for sale in the Washington DC / Baltimore MD metro area. City annexation of the Renn Farm was approved in August by the Frederick County Council. City officials cited the need for more light industrial or M-1 zoned property as the reason for the land’s transfer and rezoning.

Richard Griffin, director of The City of Frederick’s Department of Economic Development says that annexation provides Frederick with an important economic development opportunity. “Having available zoned land with appropriate infrastructure is critical to attracting quality employers and investment,” he said. “The annexation will contribute to the potential for new employment and an increased City tax base, which is vital to long term municipal sustainability.”

Jim Mackintosh, co-owner of Mackintosh Realtors, represents the property owners and says, “the Renn Farm is sizeable enough to accommodate a number of large companies that want to purchase and locate there.” Mackintosh says it has a total 3,000,000 sf. build-out and is among the closest such industrial properties to Washington, DC that is currently on the market. “The property offers access to the mid-Atlantic region’s enormous distribution, consumer and employment base.”

Helen Propheter, director of the Frederick County Office of Economic Development, agrees with Griffin and believes that the availability of industrial zoned land is imperative to Frederick County’s overall business development. “About once a month we receive a request from an industrial business that is interested in purchasing–not leasing–but purchasing property. Having a variety of land and zoning options is vital to being able to respond to need.”

Mackintosh says some industrial land does exist in Frederick County. “There are small industrial zoned properties, owned by developers, that can be leased. There are also some smaller industrial properties that can be purchased. But the Renn Farm is by far the largest industrial zoned parcel available for purchase in Frederick County.” Making the Renn Farm especially desirable, he says, is the fact that the property has water and sewer service. “Well and septic fields can provide for the needs of small users. However large users need the guarantee of adequate water service for business-related needs and fire protection.”

The M-1 zoning allows for a wide range of uses, according to Chris Smariga, president and CEO of Harris Smariga, a long-time planning, engineering and surveying company based in Frederick, MD. “Although M-1 is considered industrial, it is not heavy industrial,” he says. “M-1 can include manufacturing, storage, office, and some ancillary type businesses. Many businesses conform to this kind of zoning.”

Smariga believes there is the need for more industrial zoned land in Frederick County. “The problem is that if you don’t have land available when businesses are making inquiries you often lose them to other counties or states. Having industrial land available keeps you in the conversation.”

The property also has an additional 60-acre parcel that will retain its agricultural zoning. Macktintosh is hopeful that uses on the property might be expanded to include agricultural-related businesses such as wineries, distilleries, animal petting farms and day camps.

Propheter says the Renn Farm enjoys the advantage of excellent location–minutes from I-70, Frederick Municipal Airport, downtown Frederick, Fort Detrick, National Cancer Institute, and Riverside Research Park, which is home to Frederick National Laboratory for Cancer Research. “Adding to the appeal,” she says, “is the incentive of The City of Frederick’s Commercial and Industrial Property Tax Credit for manufacturing, fabricating or assembling operations.”

Griffin believes businesses locating on the Renn Farm will also be supported by other economic development initiatives located nearby, including “East Frederick Rising,” a 2,235 acre area on Frederick’s east side, adjacent to the annexed property, where a number of new mixed-use development projects have already taken place, with others underway.

In addition to its many amenities, Mackintosh says the Renn Farm and Frederick County land in general offers the additional benefit of financial economy. “Land in neighboring Maryland and Virginia counties is breaking record sale prices,” he says. “Here, businesses have the benefit of affordability, an enormous consumer marketplace, a lower cost of living and a much higher quality of life.”